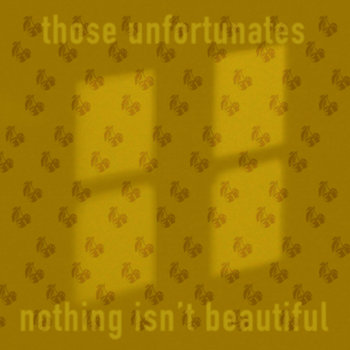 Those Unfortunates are a four piece band based in London who release on the Midnight Bell record label. Nothing Isn’t Beautiful, their debut album, is a chronological collection of thirteen songs, written between January and November 2015 and arranged and recorded live by the band over two weekends in December of that year.

Nothing Isn’t Beautiful is the story of a year – of its peaks and troughs; of dreams falling apart, and those moments when everything comes together. An album that’s deeply rooted in the streets of London, it opens with Consolations of the Life I Know, a pocket anthem to bedsit inertia, in which songwriter Ben Brill surfaces over an agoraphobic groove to find “a sort of heaven/in a sort of furnished room/where nothing isn’t beautiful/and nothing’s all I do.”

Previous singles, A Question for Mr Richardson and A Repertory Man take up similar themes. The former is a Kinksy shuffle towards death by middle management; the latter (sung by Seb Brennan), a tale of the real world creeping in, told over multi-instrumentalist Magnus Alanko’s accordion.

By the halfway mark, the tone has drifted to a dreamy pastoral drone, guitarist Henry Bird’s hypnotic guitar figures coming to the fore on the instrumental Interlude and Cherrystone Song, before the sombre spoken word, The Café at Golders Green, brings the story (almost) to a close. “Does this matter? Does it mean something?” asks Brill, searching for clarity in confusing times, “Or is it just a moment worth forgetting?”

Nothing Isn’t Beautiful was arranged and recorded live in a borrowed Norfolk cottage over two weekends in the winter of 2015-6. The band worked with producer/engineer, Thomas Hatfield (The Good Gods, Wall Sun Sun, Stats), who beautifully captures every creak of the room, along with the sound of a band finding a new way of playing together.

The album will be launched with a gig on Friday 19th May at Betsey Trotwood in Clerkenwell, London, preceded by a live session on Resonance FM on Saturday 13th May, on the deXter Bentley Hello Goodbye Show. The band will also be touring Germany in June 2017.

Recorded and produced by Thomas Hatfield in Litcham, Norfolk over the weekends of 28th-29th November 2015 and 30th-31st January 2016.
Those Unfortunates are: Magnus Alanko, Henry Bird, Seb Brennan and Ben Brill.